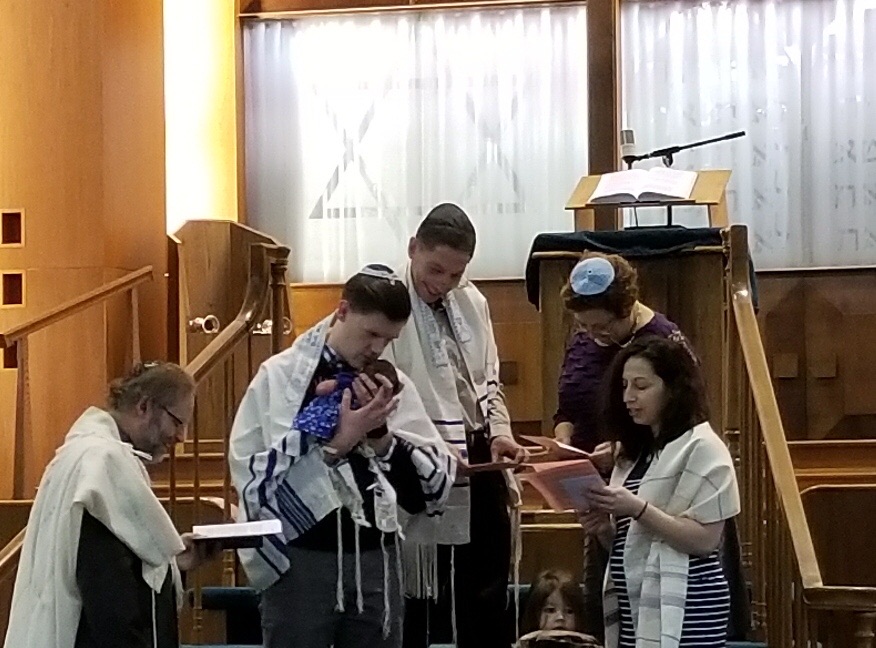 ― Martin Luther King Jr., A Testament of Hope: The Essential Writings and Speeches

Thank you all for coming to help us welcome Orli in to our lives and community.

Over the last week, we’ve been reflecting on how much this little life really wanted to be here in this world. From conception (which is a story, we’ll spare you) to birth (which was VERY fast…. some of you may have heard, we were only at the hospital 10 minutes before she was born), Orli clearly wanted to be here. In a world that seems even more volatile than usual- politically, financially, and environmentally…why would this little life want to be here so badly?

With all of that in mind, we think by naming her Orli, which means “my light”,  and Lev, which means “heart”, is fitting. Orli is named after Ilene’s paternal grandfather, whose name was Norbert, though we called him Opa, which means grandfather in German. Opa, who passed away in 2016, grew up in World War II Germany and had many dark moments in his life, including losing most of his family in the Holocaust, losing his wife at a very young age to cancer and his oldest son to cancer a few years ago. One would think after all of this loss, he would be a person who carried some sort of sadness on his shoulders, but anyone who met Opa would only use positive words to describe him.

While we used the O from Opa for Orli’s name, it is interesting to note, Norbert actually has an element of light to it as well. Norbert in German means “shining from the north” and that’s exactly the attitude Opa brought to life. In his 94 years, his bright blue eyes continued to shine and find happiness whether it was with one of his girlfriends, traveling around the world, listening to classical music or on the tennis court. Orli’s middle name, Lev, also reflects how large a heart Opa had. He was very intune with politics and displayed a lot of passion for current events, education, and life in general.

So why would our little Orli Lev want to join this world so badly? Because she will bring light to an otherwise unstable world just as Opa did. To us, as family, she already has provided perspective and light. This light will continue to reflect and provide warmth to her friends she will meet throughout her life and to this thriving community. And then she will continue to spread her light to the world. We have a feeling Orli will continue to shine her light and do big things. However lights can not shine without fuel. We call on you as a community to help us provide the tools and opportunities to allow our daughters, especially Orli, to continue to feel empowered and shine.

See my website for more about our travels, etc. http://www.gsfriedman.com